pretty much what the title says. I disconnected the 007bw from the BT device and reconnected the bt device and get the same 100% fan reading though on the wifi connected device it has a number other than 100, sometimes 0, sometimes something else. on the 007bw itself the fan % reading was the same as that on the wifi connected device. I even switched the devices completely so that the 007bw was then connected by BT to the device that previously was connected to it via wifi and vice versa. Same result. And this is constant, not occasional. I also deleted the 007bw from the “BT available” list on the device that was using wifi for connection so there was no accidental or redundant BT connection. 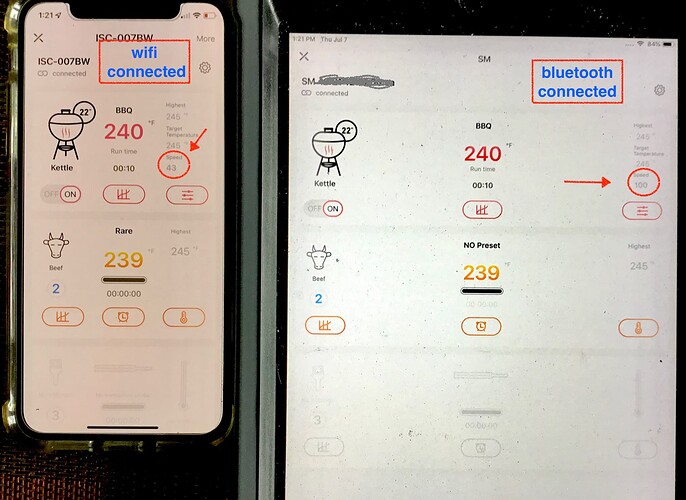 Hello,
May I know which app are you using? Is it Inkbird pro or INKBIRD?
Could you please let me know the phone model?

I contacted the engineers and they tested the Inkbird pro app and confirmed the issue. They will fix it as soon as possible. Sorry for the inconvenience.
If you need the bluetooth function, maybe you can use INKBIRD app first, they tested this app is no problem.

INKBIRD app is the newly released app, which is upgraded from Inkbird pro app. Future WIFI/ Bluetooth products will be updated on the INKBIRD app.

OK. Will I be able to update the lsc-007bw from the newly released inkbird app?

I see that the inkbird app does not have anyway to connect to the isc-007 with bluetooth. If i want to use the isc-007 in a place where there is no wifi I cannot use it. This photo is of 2 apple devices looking at the same isc-007.

Edit: 6 hrs later after using the inkbird app instead of the inkbird pro app. I notice that if my iPhone goes to sleep, which all iPhones do to preserve battery, upon waking up the iPhone and checking the inkbird app, at least 50% of the time the temp reading is not correct on either the grill temp or the meat probe. and most of the time the fan % number is also incorrect, iPhone waken from sleep says 100% even when grill temp probe indicates temp is at or above target temp. I will even wait a minute to see if app refreshes, sometimes it does, sometimes it does not. (i’ve checked it against an iPad that i set to never sleep). This is only corrected by quitting app in iPhone and restarting inkbird app. The whole reason I switched from the inkbird pro app to the inkbird app was because sometimes the fan % reading was not correct if using inkbird pro app in bluetooth mode. Tania told me the inkbird app (not the pro version) corrected this problem. It basically has the same problem except now its over wifi because the inkbird app won’t even let u connect to the lsc-007 via bluetooth at all. Just not good working device at all. 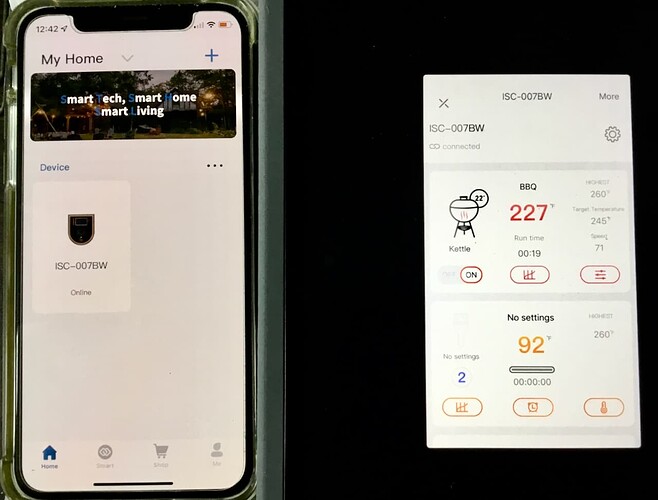 I have contacted the engineers to check. If there is any news, I will let you know.
If possible, could you please provide a video of the problem to support@inkbird.com? This can help them analyze the problem faster.
Thanks.