regarding the Inkbird Pro app version 3.3.10 for android, it makes the app crash when trying to enter a “temperature correction value” for an older version of an OBS-TH1 thermometer transiting via a ITC-308-WIFI.

For more recent version of IBS-TH1, everithing seems to be fine.

Tried emailing this to the email adress provided on google play store (ken@ink-bird.com), but it doesnt seems to be valid or something.

Thanks for your reply!

yes, i forgot to mention that everything is passing thru a ibs-m1 gateway. Sorry about this.

The bug must come from the app itself since just clicking on value to change it (it is initially 0.0), it makes the app crash.

Please note that I made a note on a related but different problem on the comment section of your beta Inkbird Pro app, on google play. See screen capture attached.

If your open to it, I also have many smaller suggestions (not bugs) to help improve your app.
Previously, I was using the meazurem app (on android. now closing, presumably for legal reason), which had a effective graphical interface with zooming and many simultanious sensor temperature on the same graphic. Also, graphics and export fonction should have an option for more frequent datapoint (not just 1 every 15 minutes…).

You are offering really nice products, with effective live temperature/humidity streaming. You should now better feed the ‘data savvy’ users, who need a logging of those value, with more frequent datapoint!

Thanks for contacting me! 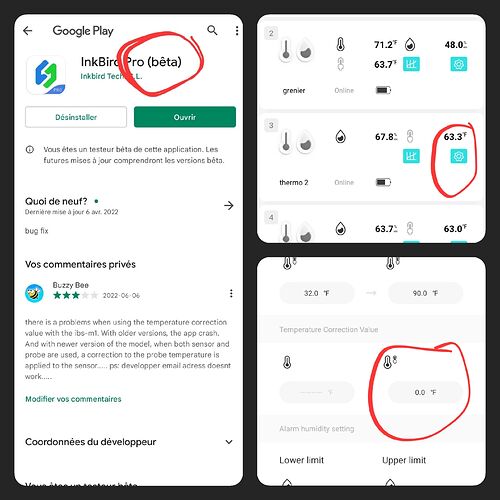 I contacted the engineers, they tested the Inkbird pro app and there is no problem. Is it possible to provide the version number of the old version and the new version of IBS-TH1 so they can do further checks? If it is possible, please provide the recording screen of this problem.
Also, maybe you can download the INKBIRD app and test it? Will it have the same problem? It is a newly released app and it will replace Inkbird pro app in the future.
About the graphic, the zoom function is in the plan, it takes time to update. The time interval for CSV data export is dependent on the time interval setting of the sensor, maybe you can adjust it as needed.

Note that I have installed the newer Inkbird app, but havent set it up yet. So the following comments are the ‘older’ Inkbird Pro app only.

Also note that some time after my initial remark about the app crashing, I went to your “beta program” for the Inkbird Pro app (this is offered on android play).

So, after your lastest comments and requests, I did some testing on the beta version, to realise that the app was now working flawlessly. I then removed the beta version and went back to the “public” version, and the bug was there again.

As for enterring a temperature correction value in the available “beta” version, I tested touroughly and can confirm that it is working flawlessly.
The only reel problem is that this beta version wasnt published as the real/final/public version of the app to your users!!

Other comments (some might already be ok in the beta version) :

I hope this can help! (please let me know!)
if not, i’m open to help again.
(this take some time… any available perks? 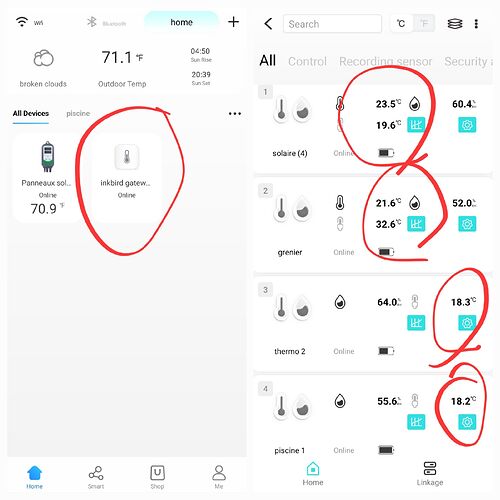 Thank you for the details and suggestions.
I have communicated with the engineers and they updated Inkbird pro (official version 3.3.11) and solved the crash issue. Maybe you can use the latest version?
Regarding the location of temperature and humidity, it needs to be discussed between engineers and UI designers. It will take some time.
INKBIRD app is the latest app which will integrate Inkbird smart app, Inkbird pro app , BBQ GO PRO app products. We will recommend INKBIRD app more in the future.
About the main page, this may not be adjusted. Because 1 IBS-M1 can connect 50 sensors, if someone uses 2 IBS-M1 and connects 100 sensors, this may not be good to distinguish management.

This is a major annoyance to anyone using the sensors!

to reproduce the problem:

I first calibrated the external sensors of all 3 thermometers, and then unpluggued the sensors to calibrate internal sensors.
(even if the INKBIRD app dont show internal temp for older model of IBS-TH1 when remote sensor is plugued in… I thought the value would anyway be stored somewhere… ).

When I plugued back the remote sensors (my present usage), the corrective values for remote sensors where gone for all 3 thermometers (new and old models) !

could this be corrected?

I’ve reported this issue to the engineers and they will optimize it.